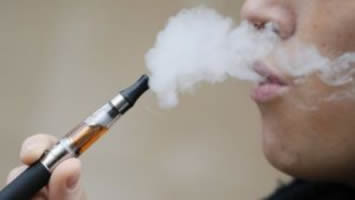 According to the American Cancer Society, e-cigarettes are a form of electronic nicotine delivery system (ENDS). They are small battery-operated devices that look like cigarettes. When the smoker puffs on it, the system delivers a vapor of flavorings, nicotine, and other chemicals. The vapor is inhaled like cigarette smoke, and the nicotine is absorbed into the lungs. The success of e-cigarettes has expanded into the sale of e-cigars, “vape pens”, and “e-hookahs”. Many states do not have an age requirement for buying e-cigarettes, and there are few if any warnings on these “e-cigs”. These devices are also used by traditional smokers in order to take nicotine to places where smoking is not allowed.

The manufacturers of electronic nicotine delivery systems tout their ingredients as safe, but there are still substances being inhaled, and there has been little research or testing regarding these substances. Many e-cigarette cartridges are not labeled with ingredients, so it is unknown what substances are being inhaled. According to the U.S. Food & Drug Administration, the amounts of nicotine and other substances a person gets from each cartridge are also unclear and have been found to vary greatly, even when comparing same brand cartridges from the same manufacturer.

When the solutions in ENDS are heated, they release acetaldehyde and formaldehyde – known toxins. The flavorings in the solutions may also be toxic. Studies have shown that e-cigarettes can cause short-term lung changes that are much like those caused by regular cigarettes. But long-term health effects are still unclear. This is an active area of research, but right now not much is known about the safety of these products.

Beginning on August 8, 2016, the U.S. Food and Drug Administration will begin to regulate ENDS. The FDA regulations will subject all manufacturers, importers and/or retailers of newly-regulated tobacco products to any applicable provisions related to tobacco products in the Federal Food, Drug, and Cosmetic Act and FDA regulations. In addition, there are several provisions aimed at restricting youth access to tobacco products, including not allowing sales to persons under the age of 18. The FDA rule requires all newly-regulated covered tobacco products must bear the following warning statement: “WARNING: This product contains nicotine. Nicotine is an addictive chemical.” At this time, it is too soon to tell if the newly enacted FDA regulations will affect the use and/or manufacture of ENDS.

The lack of research and regulation of ENDS creates many questions regarding the safety and long term effects of these devices. The American Cancer Society has determined that since ENDS are designed to deliver nicotine, this strongly suggests that ENDS use will lead to nicotine dependence, which could lead to the use of other tobacco products. Therefore, the American Cancer Society cannot recommend e-cigarettes and other ENDS products to help people quit smoking, because it isn’t yet known if they are safe and effective.

While many individuals have used e-cigarettes in order to quit smoking or to avoid the risks caused by smoking, “vaping” can lead to many other risks and may not eliminate risks associated with conventional smoking. Researchers had determined that in animal studies, e-cig vapors, whether containing nicotine or not, alter genes in the frontal cortex.  The nature of the gene changes suggest that affected animals would exhibit behavioral changes, including ones associated with mental illness and hyper activity. Researchers observed that exposure to e-cig vapors in the womb caused the male animals to suffer from reproductive problems, and both sexes showed signs of emerging atherosclerosis. In both cases it appears that toxic aldehydes, such as acrolein, formaldehyde and acetaldehyde, are contributors.

A 2015 analysis published in the New England Journal of Medicine found that the exposure to formaldehyde from e-cigarettes, based on similar chronic use as tobacco, could be five to 15 times higher than from smoking cigarettes. According to the American Cancer Society, exposure to formaldehyde has been shown to cause cancer in laboratory animals and has also been linked to some cancers in humans, including throat cancer, nasal cancer, leukemia, and “popcorn lung”.

A study published on July 27, 2016 in the journal Environmental Science and Technology by researchers at the Lawrence Berkeley National Laboratory, “Emissions from Electronic Cigarettes: Key Parameters Affecting the Release of Harmful Chemicals”, found propylene glycol, an eye and respiratory irritant, and glycerin, a skin, eye and respiratory irritant, among 29 other chemicals released in e-cigarette vapor. According to this study, both chemicals are considered “probable carcinogens” by federal health officials. These chemical are used in e-cigarettes to create artificial smoke.

The Future of “Vaping”

According to the Centers for Disease Control, in 2014, two million high school students used e-cigarettes. Several U.S. Senators have asked the FDA to stop the marketing and sale of e-cigarettes to children. Experts are particularly concerned that the many candy-like flavors, such as bubble gum and cotton candy, are produced primarily to appeal to children. This marketing is creating a potential class of plaintiffs in this potential toxic tort.

Based on the research thus far, and the lack of regulation, this appears to be a potential area of liability in the future. As we learn more about the long-term effects of e-cigarettes, the potential for litigation will become more apparent.

In our current asbestos practice, the prevalence of e-cigarette use in older individuals, as a method to quit smoking, may actually be causing or increasing their risk of developing lung cancer. Specifically with respect to alleged asbestos-related lung cancers, we may want to consider questioning plaintiffs whether, even if they have quit smoking, whether they are using e-cigarettes, which continues their exposures to known carcinogens.

While it is too soon to tell if “vaping” will be the next wave of toxic tort litigation, research shows that e-cigarettes are not necessarily a safe alternative to smoking. Additionally, the lack of regulation of the e-cigarette industry creates the potential for liability related to the hazards of “vaping”.