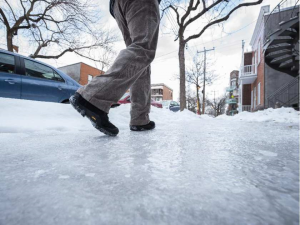 With the coming of winter Illinoisans are once again getting their snow shovels and ice melt ready to remove the white stuff from their residential driveways and sidewalks.  The question is, what is a residential property owners’ duty to remove snow?

In Illinois, a property owner has no duty to remove naturally occurring snow and ice from a property.  Krywin v Chicago Transit Authority, 238 Ill.2d 215, 227(2010).  However, the common law of Illinois was that if a residential property owner did undertake snow removal around a residential property there could be liability for negligently undertaking the snow removal.  Up until 1979, owners risked liability for their voluntary clearing of snow and ice from their residential property if the clearing negligently created an unnatural accumulation of snow or ice.  If the owner did not undertake to clear the snow or ice, they faced no liability.

In an effort to encourage residential owners to clear snow and ice from residential properties, the General Assembly, in 1979, passed the Snow and Ice Removal Act.  The Act provides immunity to residential property owners from liability in connection with their snow or ice removal efforts.  745 ILCS 75/1, 2.   The owners still owe a duty of reasonable care to prevent unnatural accumulation of ice and snow on their property where the owner has actual or constructive knowledge of the dangerous condition.  Graham v City of Chicago, 346 Ill. 638 (1931).

There have been many different theories for liability resulting from the accumulation of ice and snow.  But the two main theories are: 1) defective conditions or negligent maintenance of the property, and 2) a voluntary undertaking theory.  Recently, the Illinois Supreme Court provided some clarification on how the immunity provided by the Snow and Ice Removal Act applies to these two theories of liability.

In Murphy-Hylton v. Lieberman Management Services, Inc., the Illinois Supreme Court clarified that a residential property owner has immunity for undertaking the removal of naturally accumulated snow or ice even if the removal causes an unnatural accumulation of snow or ice that ultimately leads to injury.  2016 IL 120394 (December 1, 2016).  An example would be if an owner piled up snow which in turn created an ice ridge upon which a person slipped.  The unnatural ice ridge was created because of negligent snow or ice removal.  The property owner would have immunity from this claim.

Winter is coming, so make sure to remember to dig out the Snow and Ice Removal Act on your next slip and fall case.