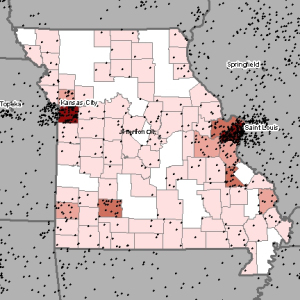 Beginning on January 1, 2014, the Missouri Workers’ Compensation Act applies to mesothelioma and other toxic exposure. On July 11, 2013, Missouri Governor Jay Nixon signed Senate Bill 1, which amended the Missouri Workers’ Compensation Act, modifying the Act’s language regarding the Second Injury Fund and occupational diseases. For the purposes of this article, we will focus on the changes to the Act made to occupational diseases under Senate Bill 1.

Once these toxic exposure awards are exhausted, permanent total disability shall be awarded to the injured worker. Upon death, the enhanced benefits must be paid to the employee’s dependents or become an asset of the employee’s estate if there are no dependents.

Additionally, the amended Act creates the Missouri Mesothelioma Risk Management Fund, which pays the benefits awarded in claims brought against the Fund’s contributing members. The Fund requires annual contributions to be made by its members. Employers who do not obtain insurance for mesothelioma liability shall not fall under the exclusive remedy provisions of the Act, therefore, a claim may be brought against these employers in civil court.

The Missouri Workers’ Compensation Act is the exclusive remedy for plaintiffs who are considered employees under the Act. If the employer insures for mesothelioma liability, the employee must bring their claim of occupational disease due to toxic exposure in the workers’ compensation system. Plaintiffs will still have the remedy to bring a civil case against manufacturers, distributors, and suppliers who allegedly contributed to their asbestos related disease. The effect for Missouri employers of the exclusive remedy of the Missouri Workers Compensation Act, is that the awards are capped, however, there will most likely only be one employer-defendant (or their insurer) to bear the brunt of this award.

It remains to be seen if in the plaintiff’s civil case against manufacturer, distributor, and supplier defendants, whether evidence of asbestos exposure adduced in the underlying workers’ compensation case will be conclusive evidence of asbestos exposure by the civil defendants. Additionally, it is unclear whether the defendants in a civil asbestos case could claim the workers’ compensation award as an offset against damages awarded to a plaintiff.

Though has yet to be any case law to interpret the amended Act, a recent Motion for Summary Judgment based on the exclusivity of the Missouri Workers Compensation Act was argued in St. Louis City in front of Judge Robert Dierker. In Rohletter v. Aerco International, et al, Defendant Southern Industrial argued that since the plaintiff was an employee of Southern Industrials’ predecessor, the Missouri Workers Compensation exclusive remedy should apply and the plaintiff would be required to pursue a claim in the workers compensation system. Southern Industrial argued that the newly amended Act would apply.

Judge Dierker indicated the Missouri Supreme Court had decided that the right to a trial cannot be trumped by the workers’ compensation system. Even when defense counsel pointed out the Missouri Workers’ Compensation Act provided for exclusive jurisdiction, Judge Dierker felt that the plaintiff had the right to bring their case in civil court. Judge Dierker interpreted the new amendment to apply to cases that “arise” after the January 1, 2014 effective date of the amendment. He indicated the key is when the claim “arose”, which would mean that the death or diagnoses would have to occur after January 1, 2014.

The full effect of these amendments to Missouri Workers’ Compensation Act has yet to be seen, but there is no doubt these amendments will change the landscape of asbestos litigation in Missouri.